How To Get A Quote


Quotation requests are required in writing and prices cannnot be provided over the phone. Trade Prices require a company letter head or purchase order.

What Information Do We Require?

In order to process your quotation request and provide you with an accurate price, we require the following information (click here to see an example of the information we need):


Please note: All of our products are bespoke and made-to-measure, to your exact specifications.

If you continue without changing your settings we will presume that you are happy with the use of all cookies on
this website. You can visit our cookies page to find out more or change your settings at any time. 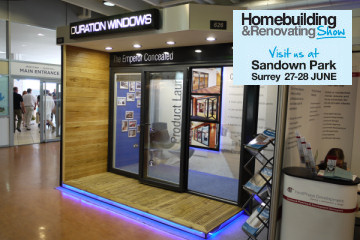 After the success of The National Homebuilding and Renovating Show at the NEC in Birmingham, we had high hopes for The Southern Homebuilding and Renovating Show, we were not disappointed. This was the first time we have ever exhibited at Sandown Park and we had heard it can get busy, but we were not prepared for just how busy it was. For a relatively small event it was heaving with people. If we go again next year, which seems highly likely, we will need to take a bigger stand, more staff and more brochures. We were very pleased with the overall response we got from our Concealed Hinge Bifold Doors and the leads that resulted from the show.

This show was great value for money and was another successful Homebuilding and Renovating Show. The show was only short two day weekend which ran from the 27th to the 28th of June 2015. The Homebuilding & Renovating Show is one of the UK's largest self-build and renovating events, and one of the longest running home improvement shows. It claims to be the home of inspiration & unrivalled expert advice. There were loads of exhibitors, fantastic NEW products and unbeatable expert advice to help you achieve your dream home.

©2021 Duration Windows. We reserve the right to change specifications.
We continuously wish to improve and we kindly inform you that all incoming and outgoing phone calls may be recorded for quality and training purposes.